Rating: Go to Guest Services and Talk to Ms. Fulton.

You may be wondering what in the world the above rating could possibly mean. Fear not, that will be addressed presently. The conduit through which this information shall become known is what could be called a thoroughly unconventional review of the newest Tom Cruise vehicle: Mission Impossible – Fallout.

As with many action movies, if you’ve seen any entry in this franchise, you know what to expect. Tom Cruise will do some running, Simon Pegg will crack some jokes, Ving Rhames will look tired, somebody will wear an unrealistically convincing rubber mask, and there is very likely a threat of nuclear apocalypse. If you were a fan of any of these elements in MI: 1-5, rest assured, they’re still very well represented here.

This time around, it’s up to the gang (sans Jeremy Renner, but with the welcome addition of Henry Cavill’s mustache) to recover three balls of plutonium before they can fall into the hands of an anarchist who thinks that blowing up holy sites across the globe will usher in the new world order. If that sounds ridiculous, that’s because it is, and it doesn’t matter. Mission Impossible’s bread and butter is, and always has been over-the-top, thoroughly unrealistic high-octane action setpieces, and that’s not a bad thing. That’s what you want when you’re attending a film like this. I’d be extraordinarily confused if I sat down in a theater showing the sixth entry of the Mission Impossible series and it was two hours of Ethan Hunt dealing with the shattered remains of his marriage or trying to relate to his father. Emotional depth is always welcome, but within the genre, it’s not a vital ingredient.

On this level as well as a few others, Fallout delivers. At my most recent count, there was a quintuple-cross, which is a seriously impressive number of plot twists. Furthermore, in between all of the multilayered back-stabbing, you’ll find what is far and away the best looking MI yet. Everything looks sleek, the punches practically pop off of the screen, and the camera work (including some genuinely incredible single-shot sequences) put the spotlight directly on Tom Cruise’s enthusiastic (and thrilling) attempts to die horribly in a stunt-related accident.

What, you may be asking yourself, does any of this have to do with guest services? And who is Ms. Fulton anyway? Calm down, calm down. All in good time.

Allow me to set the scene: Tom Cruise, fresh from sprinting several miles across London rooftops, finally catches up to his fleeing foe, only to find himself facing him through the grate of an ascending service elevator. Never one to let a mark escape, Cruise flings himself forward, grabbing the conveniently placed metal bars protruding from the bottom of the lift. It’s the climax of a fast-paced chase, and the film is on the cusp of dropping yet another major twist.

And then this happened:
(Minor spoilers ahead)

And it kept happening. For a long, long time. The film had literally broken down.

Every minute or so, it would start, play for about half a second, and then freeze in place, condemning an entire theater full of people to stare deeply into the eyes of a Scientologist, or inviting them to soak in the majesty of the ‘stache that did what Zod could not. After about ten minutes, some poor boy was sent in to inform the crowd that the theater was aware of the problem, and it would be resolved in five minutes or so. We gained this insight in broken segments, as the film saw fit to jolt back to life each and every time this unfortunate messenger opened his mouth.

This resulted in a kind of beautiful tableau; a deconstruction of what makes film possible. As an art installation, I can see it doing quite well on a college campus. In reality, it’s a remarkably effective way to really irk fifty or sixty people simultaneously. I, however, was not among them. I was having the time of my life, and I’d love to share this unique joy with you. 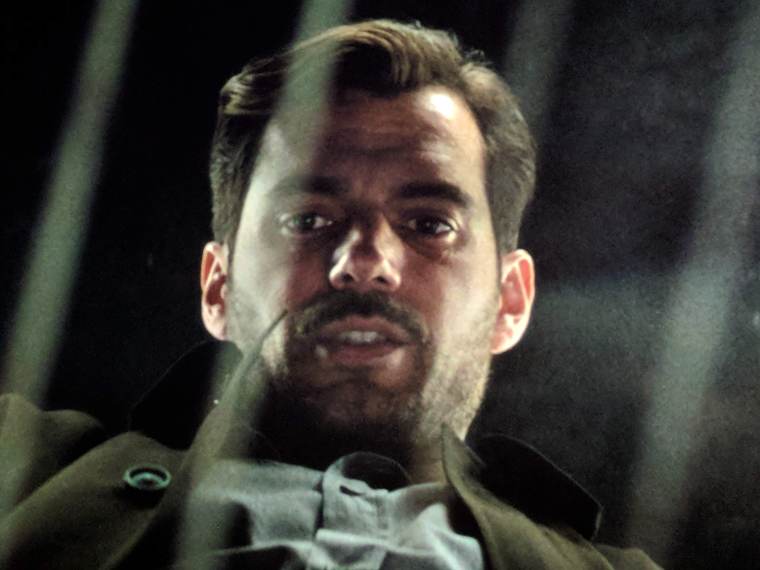 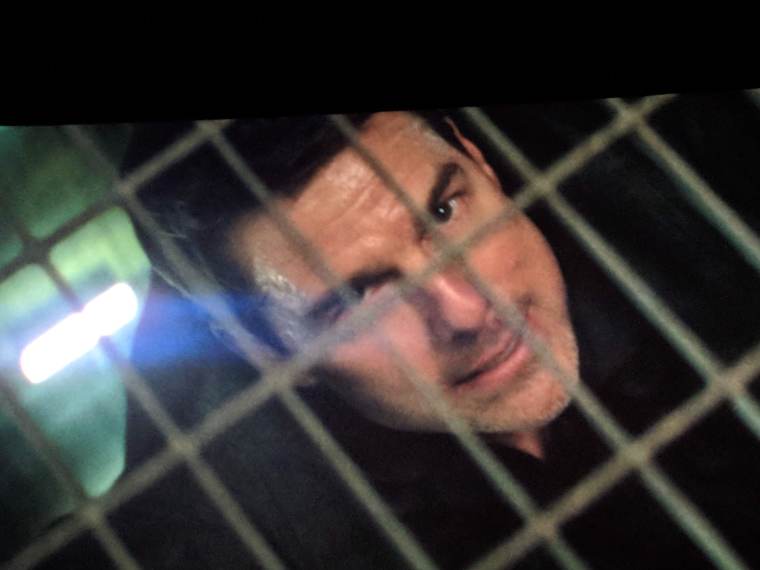 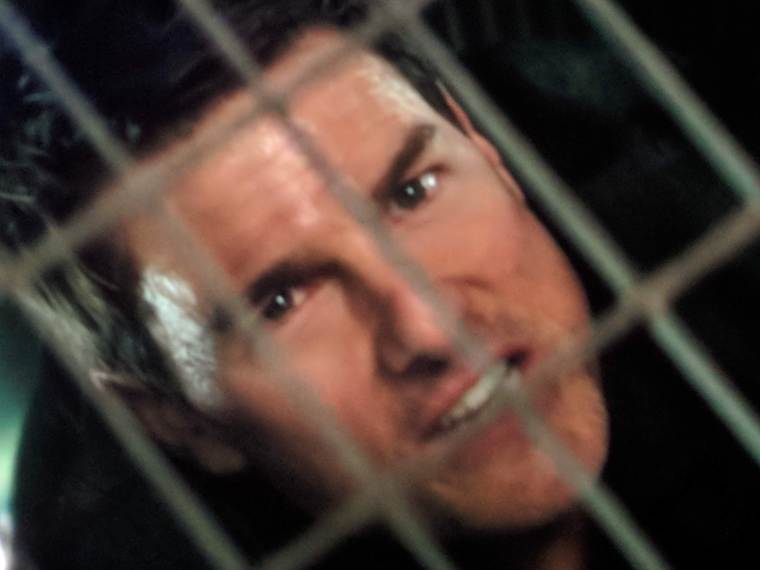 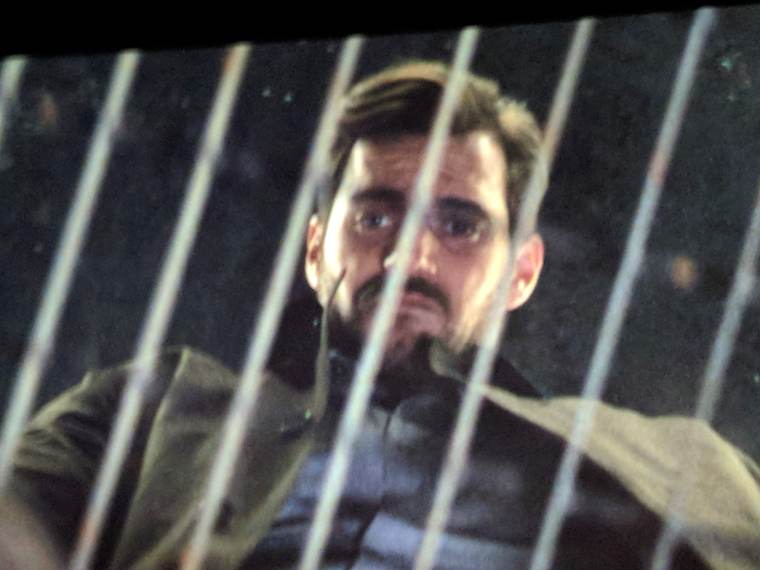 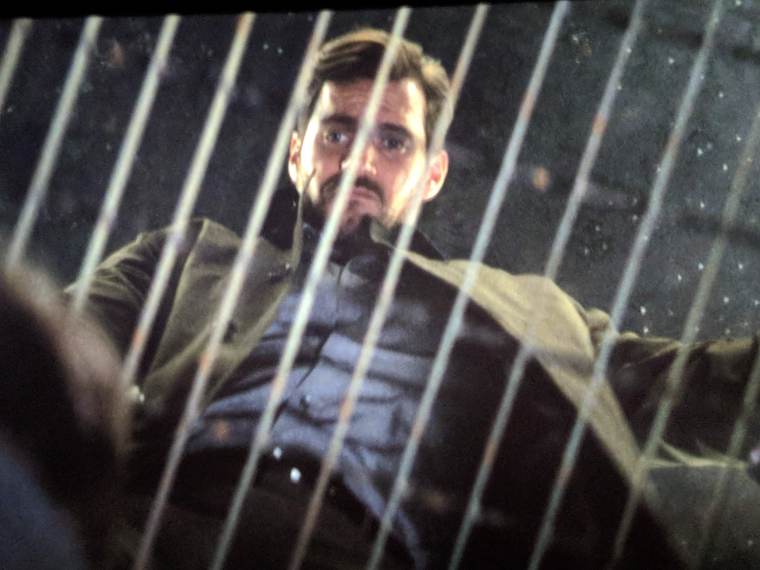 For our patience, we were rewarded with this stunning visage: 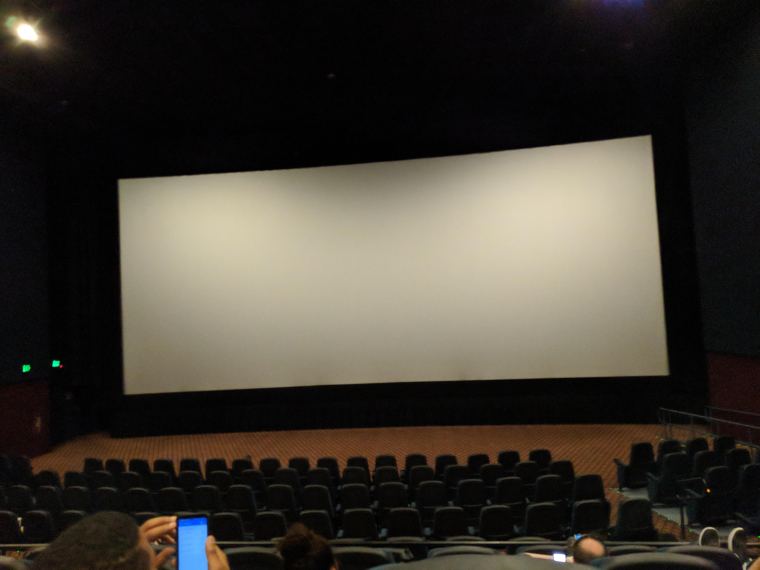 After the promised five minutes, the film did restart, only to freeze again at roughly the same spot. 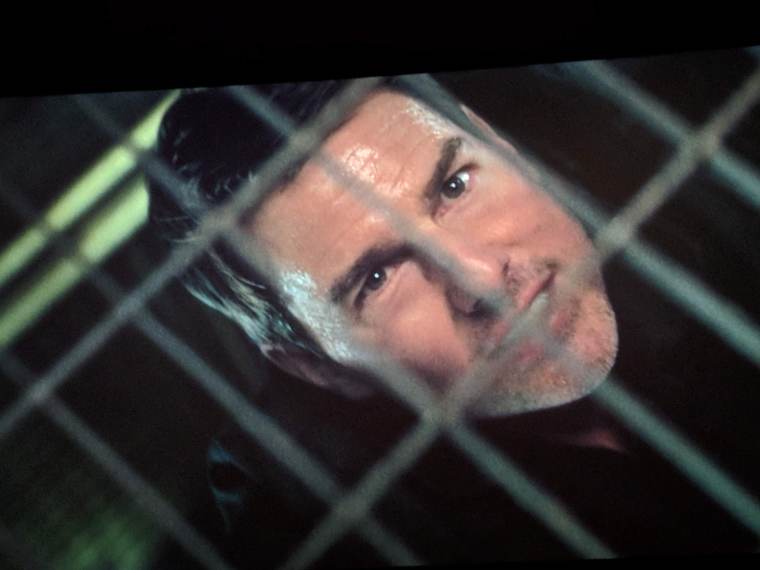 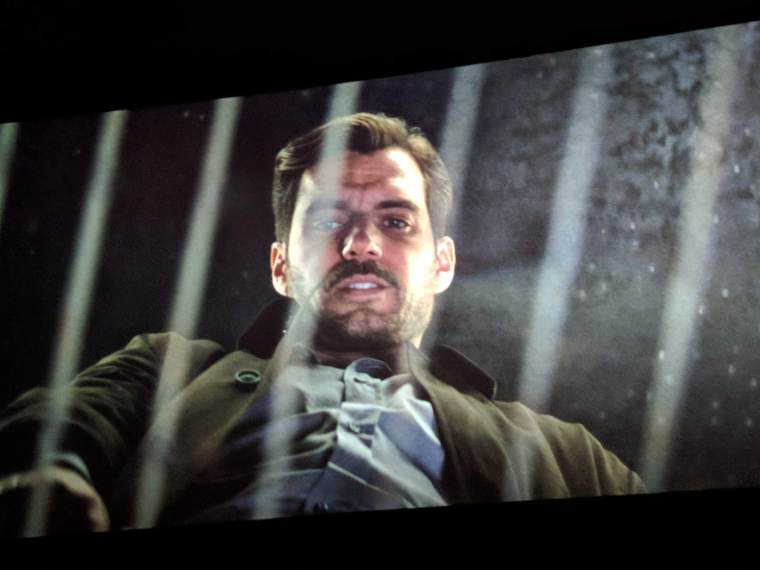 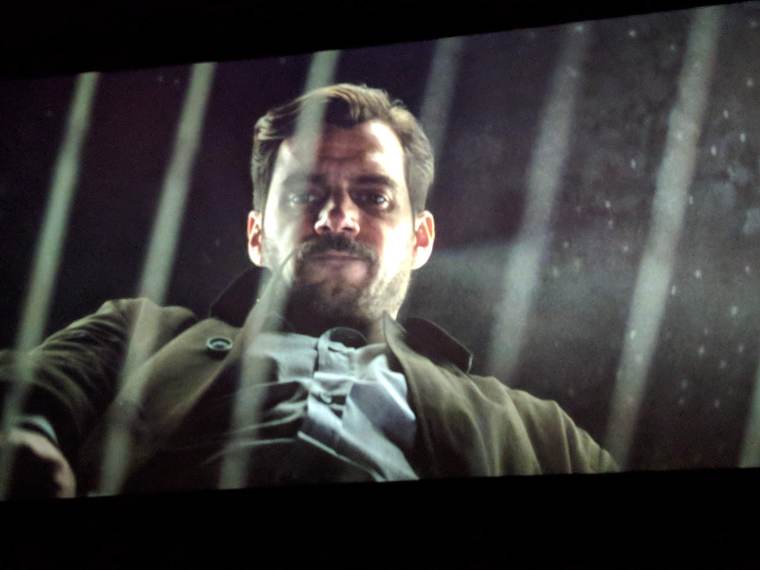 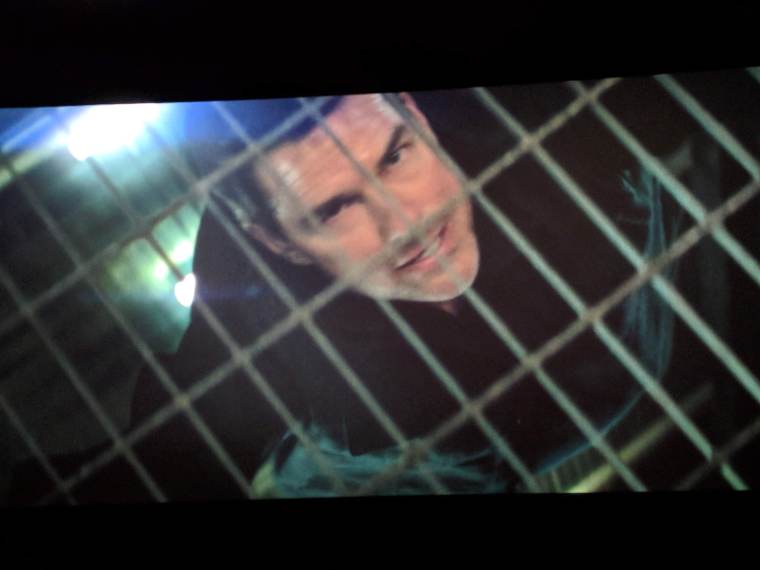 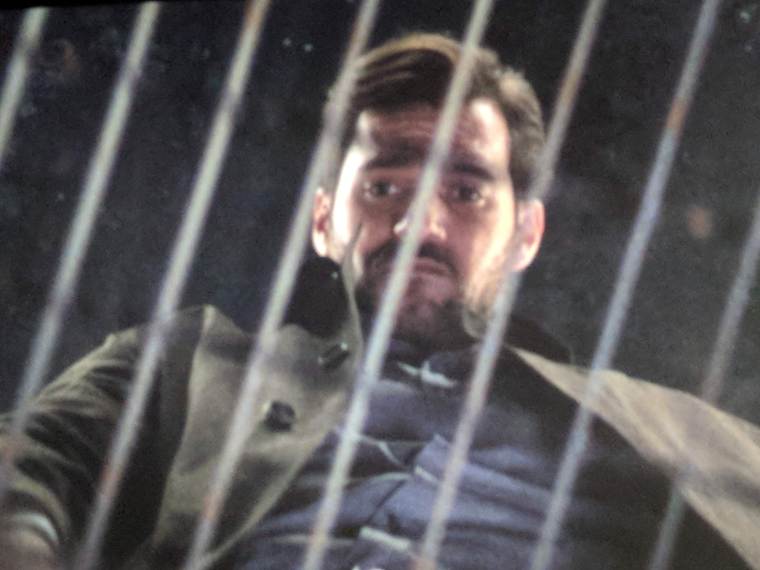 After another five glorious minutes, a different employee arrived with a simple message: “Go to guest services and talk to Ms. Fulton.” And that’s all she would say.

Having received no definitive explanation of what in fact this invitation signified, I and many others continued to watch Mission Impossible: Fallout at about three frames-per-minute for longer than I’m proud of. Were we fearful that the power wielded by Ms. Fulton would correct the issue while we were absent? Did we think that the conference with Ms. Fulton was only for those discontent with their experience and who had no desire to stick it out to the end? Were we simply dolts?

In the end, we all ended up leaving to pursue Ms. Fulton and her promise of compensation. I myself never met Ms. Fulton, as she was in charge of giving out rain-checks and I opted instead for a full refund. This anonymity serves only to increase the mythos of Ms. Fulton, at least in my eyes.

And so, this is why I would consider this to be a far cry from a traditional review, as I make it a habit to actually see the entirety of a movie before I judge it publically. Still, it might say something about the film that I’m not exactly burning rubber in my fervor to sit through two hours of Fallout that I’ve already seen just for the benefit of seeing Tom Cruise save the day with my eyes rather than my imagination.

If I ever do complete this odyssey, I’ll update this review with a legitimate rating. If I go back to the theater for this viewing, maybe I’ll stop by guest services and have a chat with Ms. Fulton. Maybe, but I wouldn’t want to ruin the magic.

Or maybe I’ll just do a full review of Henry Cavill’s mustache.